It's summer time! Which in my house, means that every time you to go the grocery store, you come home with twice as much fruit than you had planned to buy.

But what to do with all that yummy fruit laying around, before it goes bad?

When picking up groceries the other day, me and the boyfriend decided to get an extra watermelon while they are in season, and I was going to puree one of them and store it up for making watermelon-flavored kombucha (doesn't that sound delicious?!). But we had run out of popsicles in the freezer, so I was going to make another batch. We made some strawberry banana ones last time, and they were AWESOME, but I thought maybe watermelon could be good.

HOLY MOLEY, this was the best decision ever! You could definitely make these with little dixie cups and popsicle sticks if you don't have the freezer mold. It was like $5 on Amazon, and one of the best things that we bought because we make a new batch at least once a week! Perfect little evening treats, especially on these hot summer days. 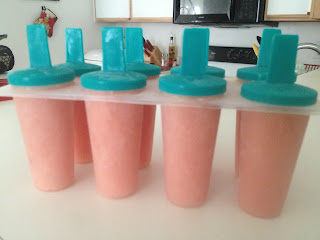 You know what else would be delicious? Make these into ice cubes. The possibilities are endless.  WARNING: be prepared to eat all of them way quicker than you planned!

Ingredients
1) 1 cup of coconut milk (I use full-fat, canned, but you could use Lite or even in the carton, or even cow's milk if you're feeling brave)
2) 2-3 cups of seedless watermelon

Instructions
1) Puree the watermelon with the coconut milk in a food processor or blender, until smooth. Don't worry about the little white seeds, you will hardly notice them at all.
2) Poor into your popsicle molds, or into your dixie cups. Then put the lids on, or the popsicle sticks in if you went that route.
3) Put in the freezer and let harden up, probably about 4 hours.

We ended up having about a good 1/2 cup leftover after filling up the molds, which my boyfriend happily drank as a smoothie. Even though it's the same ingredients, the flavor of the smoothie doesn't do justice in showing what will happen when the popsicles harden! 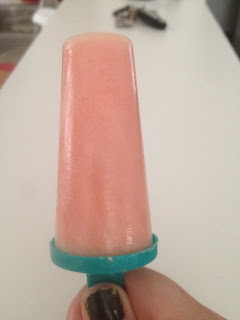 Posted by Cassy Polanski at 1:59 PM

Cassy Polanski
Austin, TX
Keep it simple! I'm a busy woman, between being a full-time PT and a wife, and trying to work out every day, I don't always have time to make super complicated food to keep us on our Paleo journey. Nothing like a simple meal with minimal ingredients that you can throw together quickly. That's what this blog is all about. Thanks for reading!

New to Paleo? This guide is for you!

Where I Buy Meat:

Where I Buy Coconut Products: